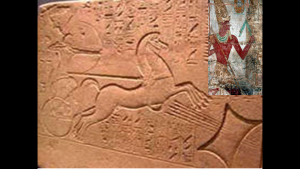 The picture above is a montage of Amenhotep II, whom I believe is the Pharaoh of Exodus. Just look at this guy…especially the shot of him on his own war chariot, and ask yourself: Does he not look the part of the adversary Moshe describes in this section of Exodus? Bear in mind this carving of him was done after he died, but if my identification is correct, the man Moshe confronts is much younger, athletic ruler and seasoned commander all of 26 years old and with 8 solid years of experience on the throne–10 if we count his 2 year co-regency with his father Thutmoses III who may be the greatest warrior king of them all. Imagine Moshe going up against this formidable king whose empire is at the peak of its power and experience, more than 1,700 years after his civilization was founded. Egypt is at this moment, quite simply, the greatest human power the world had ever known, but all that counts for nothing when it goes to war, as it does this week, with Father YAH, Master of Hosts!

And finally, I make a comment about Exodus 12:43 towards the end of Video #1 that I felt the need to clarify in Video #2. Basically the way my English translation read gave me a slight hesitation as I was comparing it to the Hebrew. I was expecting to see “stranger” or “uncircumcised” rather than “estranged” as Keter Crown had it and this created some hesitation on my part as I read that was not needed. Thought you all should know in advance.