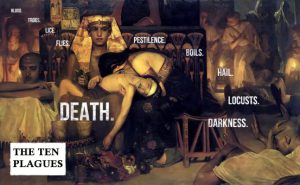 Va’Era means “and I appeared”, as in Abba YHWH explaining that He appeared to Abraham, Isaac and Jacob and this thought of course follows from His introduction in Shemot that Moshe is a descendant of these people, “I am the El of your fathers…”. After the initial “Bricks Without Straw” setback which happened last week, Moshe is strengthened to go back to Pharaoh though neither he nor his own people seem willing to do the right thing. Now also the “warning period” is over and Abba YHWH prepares to begin the real battle. After the signs of the serpent and the leprosy are given and Pharaoh refuses to listen, Moshe turns the Nile to blood and Egypt thirsts for 7 days. Plague after plague follows, along with failed attempts on Pharaoh’s part to either muddy the issue or distract Abba YHWH from His purpose. The portion ends with the plague of hail, but worse plagues are still in their future.