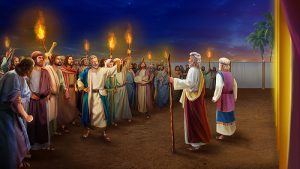 “Korah” refers to the man of the same name who was responsible for mounting a rebellion against Moshe. There are many unique aspects to this act of rebellion, such as it being led by a Levite and a confederation of other leaders, and that Moshe and Aaron are on the same side against them. We also have touches of foreshadowing of Eliyahu’s later contest against the prophets of Baal. The results of this rebellion are among the most graphic of disasters depicted in Tanakh. Because the very fabric of the priesthood was threatened, the stakes for the right side surviving were incredibly high, and when order is eventually restored this time Abba YHWH confines His instructions to the priests so that they can regain some credibility.